On Tues., Dec. 13, more than 75 people attended the Facilities Master Plan Public Meeting at the Irene B. French Community Center. The meeting was intended to provide information about the plan, and receive input from the public about how to proceed if the city decides to build a new facility.

The presentation included details about the planning process, how concepts were developed, key findings from multiples studies, and public input received throughout the process.

The consulting team of PROS, Confluence and SFS began in May 2016 by working with focus groups and facilitating public meetings to better understand the community’s expectations and how services are currently delivered. In addition, consultants spent time reviewing facility assessments to understand the current sites and deficiencies at facilities. This information was key to identify suitable city-owned land that could support the many activities the community desires for such a facility. Once various options were assessed, Vavra Park seemed to be the best fit due to its acreage, its proximity to a nearby residential complex with ties to the municipal plaza, and a federal land requirement in place related to recreation.

If the city ends up building a new facility, it will include many of the amenities residents identified in a statistically valid survey as items they most desire. The survey indicated that a community center should include an indoor walking / jogging track; indoor swimming pool and cardiovascular fitness.

Findings indicated that an aquatic center should include a zero depth entry pool and water slides.

Results of a public meeting in August produced similar results.

Once these top features were identified, the steering committee and consulting team went on to determine that a space of 65,000 square feet would be required to house those amenities.

The space would also include community meeting areas, administration / operations, and indoor aquatics. The massing diagrams helped transition to the early conceptual design phase to determine how the facility would fit in Vavra Park.

Since indoor aquatics are a top priority, three design options were developed and presented for input, illustrating different strategies for incorporating aquatic features. The first option — referred to as the “Full Meal Deal” — includes both indoor and outdoor aquatics; Option 2 only includes indoor aquatics; and Option 3 is just outdoor aquatics. The other community center features remain constant in all versions, with costs ranging from to $24.3 million to $29.9 million.

Staff recommends financing construction, by issuing a bond paid for through sales tax. The city can also provide approximately $5 million in reserves to fund the project. The “Full Meal Deal” would require a bond of approximately $25 million with an annual payment of approximately $2 million for 20 years.  The city’s current ¼-cent sales tax generates $2 million. Due to Merriam’s pull factor (4.67 – the highest in the state of Kansas), residents would most-likely only pay $360,000 of the $2 million (less than 20 cents for every dollar of sales tax). Another way of looking at it is that each resident would contribute $32 annually, or the equivalent of one Happy Meal per month. It’s also worth noting that an increase or extension of the current ¼-cent sales tax would require a public vote.

When considering the total costs for a project of this scale understanding construction costs is equally as important as understanding the operational costs — these expenses are typically more than constructions costs over the life of the building. Consultants provided pro forma information not only for year one, but for the first six years of operation for each concept. When comparing new concepts to the existing facilities, they found that is now annually subsidizing $475,265, with a cost recovery of approximately 37 percent. Pro formas developed for all three options presented showed a cost reduction due to efficiency and more use. They would require less subsidy, with a cost recovery of 75 – 80 percent. 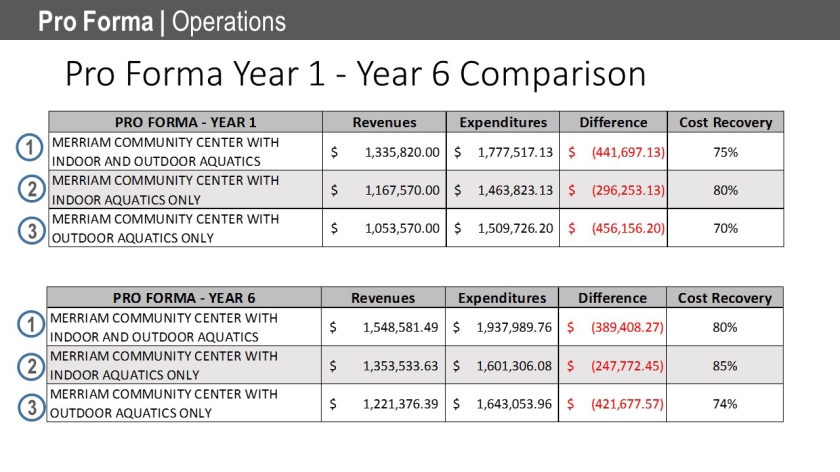 If the city built a new facility in Vavra Park, the consultants also came up with a proposal for what to do with the existing IBFCC site. Based on comments received from multiple public engagement activities, a concept was created showing how the space, in conjunction with the Marketplace, might be used. With a realignment of the existing Marketplace entry drive, the city could create a venue for large festivals and events. Merriam Drive traffic could be easily diverted, providing an accommodating flow between the Marketplace and an outdoor venue. 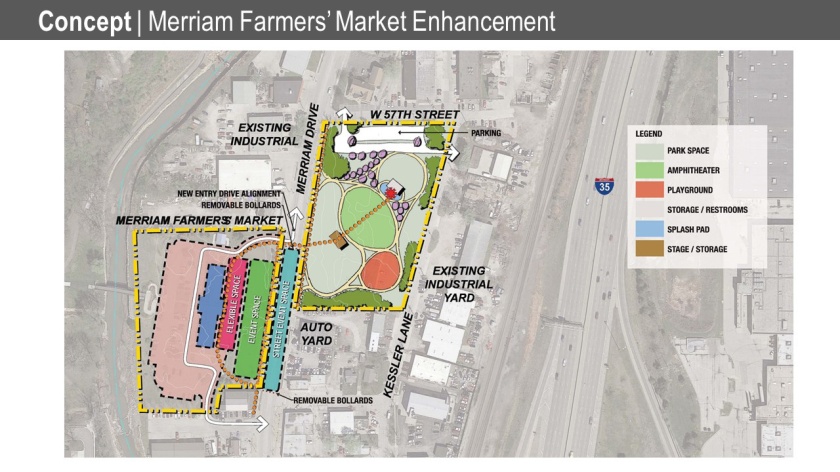 After Wednesday night’s presentation, attendees were given an opportunity to rate the three concepts and comment on the information provided. This feedback will be used to formulate recommendations and comments in the final report.

The steering committee will meet on Jan. 5 to review the final recommendation that will be presented to city council on Jan. 9 at 7 p.m., when council will acknowledge the final plan and recommendations. The visual and financial information provided on Jan. 9 is expected to spur a conversation about which option to pursue. These discussions will be part of the 2018 budget process scheduled to begin in March 2017.